Kirk Franklin posted on his facebook that Gospel Music sales are way down. Wanna know why? I can give you 5 good reasons why, and here we go.

1. Homosexuality – Even the married male gospel singers are suspect these days because they approve of the homosexual ones. They are on the stage with them, they make music with them, they have them singing background and playing instruments for them, so, where are the real men in Gospel Music? How does this affect the sales of Gospel music you may ask? Well, the devil controls the music industry so, his plan is to kill ALL sales of Gospel by merging the gospel with the secular industry. So, as Kirk puts on the pink, and Tonex dances in drag, while

Dillard drops it like it’s hot, and Woods openly performs at a lesbian wedding, the devil has a greater plot. The LGBT is getting ready to shine it’s flashlight on the church and it’s gonna catch a lot of these artists and pastor with their pants down. Once they get the goods, they will force these Gospel Artists to come out like Tonex and support Carlton Pearson’s inclusion. Who wants to buy inclusion gospel music? No one, because inclusion gospel music is secular music!

2. Copy Cats – If you like Tupac, you’ll love Lecrae. If you like WuTang, you’ll love Crossmovement. If you like JayZ, you’ll love DaTruth. And if you like Rihanna, you’ll love JMoss? Come on, where is the originality? THERE IS NONE ANYMORE! Gospel has just flat out become a carbon copy of the secular industry, the only difference is, they say Jesus at times and the women weigh more! But that doesn’t stop them from dressing sexy like their secular idols, dancing and partying, like their idols, and even touring with their secular idols. God is a God of creation, so he has the ability to create and not copy. Where are the true musicians that want to do it without worldly influences? Most of them are in the local church, praying for an opportunity to sign a record deal and become a copy cat as well.

3. Nothing special – People used to like Gospel Music because God was in it. It was different and had it’s own counter culture. There was a separation and people escaped from the harsh reality of the world when they heard praises to the most high God. But that is not what this new gospel music is. This new music is a watered down, warmed over, lack luster copy of secular music. They don’t get inspired by God to write, but they are inspired by what the devil is doing in secular music. Would God really inspire Kirk to put on pink lipstick and sing I smile? Would God inspire Donnie McClurkin to sing “ooo child, things are gonna get easier?” Is that the God of the bible inspiring them? NO. So, because these guys have fallen in love with fame and the world, the music of the Father is no longer a priority. Gospel Recording Artists are not doing what they are supposed to be doing…. instead they mix the ‘supposedly’ holy music ministry meant for the Church with the profane secular. Ezekiel 44:23 says ‘They are to teach my people the difference between the holy and the common and show them how to distinguish between the unclean and the clean.’ Bottom line is that the artists are not taking a ‘True Priest’ approach when it comes to their ministry focus. The focus of our current Gospel Artists is to meld into a culture promoted by the record label that they have signed with. When the artists meld they sell. 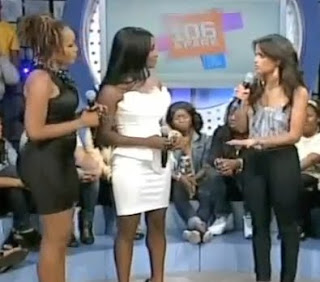 4. Carnal Audience – I preached this over and over for years and years! If you keep trying to be like the secular industry, all you gonna do is promote the secular industry! When you invite Steve Harvey and secular performers to host Gospel events, they are gonna steal your audience. They have more money, they have more resources, they have better equipment and can afford better productions, so, if they get involved they are gonna take over! Remember that old song “Don’t let the devil ride. If you let him ride, he’ll wanna drive”. Well, now he is driving. Gospel Music was so excited to get on BET and have secular folks on their show that they didn’t count the cost. What was the cost? Well, the secular folks they record and sing with, are now in position to steal their sudo christian listeners by putting a Gospel Song on their own secular records. This gives them the best of both worlds and they have absolutely, positively, no use for a full CD of Gospel music. People would rather just buy the secular music and catch the Gospel music on Sunday radio programming. Now, the church folks buy the secular music, videos, and concert tickets first and Gospel takes sloppy seconds!

5. Not worth it – In a bad economy, folks have to prioritize their purchases. Buying music is a luxury and for folks to spend their hard earned money on it, it better be worth it. Well, these modern day, turn key CD’s that are being recorded by many of the popular Gospel Artists are just not good enough. You can definitely tell that the devil’s plan to own Gospel Music has been accomplished. He now has women wearing skin tight dresses in front of teens and calling it ministry. He has plus plus sized women in lingerie in their Gospel Music videos and calling that ministry. Pants sagging, gang signing, street culture hip hop thugs are calling what they are doing ministry. Since the devil has taken over the gospel music industry, folks are just not willing to buy it like they used to be. Unsaved folks don’t want to buy sexy gospel singers music when they can just go buy Beyonce and get the real thing. And why spend money on sub par music when you can just play it for free on youtube? It’s just not good enough and it’s not living up to it’s label. Even though the church world is getting more and more carnal, they still have ears. And if it’s not spectacular, it’s pretty much gonna stay where it is and never make it into their portable music devices!

Beyonce’s father just started a new Gospel Record label featuring several desperate Gospel artists and many more corrupt labels will start up and sign more desperate artists. They are making deals with the devil and luring in all those that want fame at the cost of selling their right to sing for Jesus. These folks are being foolish. Do they really think that God is using Matthew Knowles to do something for the true Kingdom of God? Do they really believe that signing a record deal is a “door” opening from God? Would God allow a deal with the devil to promote some music? Did he allow Satan to keep making music in heaven? Then why would he allow him to control his music on earth? What are these folks thinking? Well, they are all in for a great disappointment. Gospel music is on life support and will be dead soon. The devil’s plan all along was to take God out of the Gospel Music and he has done that. Shows like Sunday’s Mess and Verizon “How sweet the men” will not be around long because offering a record deal as a prize is not really a prize at all anymore. If Kirk Franklin and others are worried about sales, how are they gonna make a contest winner’s music sell? Stick a fork in it people, because it’s done! The day is soon coming when if you desire to hear a song of the Lord, you’re gonna have to make melody in your heart like Ephesians says. Eph. 5:19 Speaking to yourselves in psalms and hymns and spiritual songs, singing and making melody in your heart to the Lord.

Want to join the discussion?
Feel free to contribute!

A WAKE UP CALL FOR GOSPEL ARTISTS